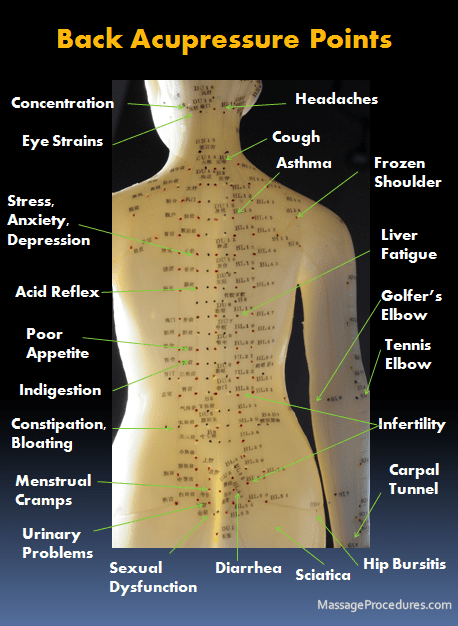 Acupressure is a traditional East Asian healing method to relieve pain, promote relaxation, wellness and to treat some diseases. During the acupressure session, a therapist stimulates acupuncture points along the meridians using fingers instead of acupuncture needles. Therefore, acupressure is sometimes called acupuncture without the needles.

In this section of MassageProcedures.com, we introduce some of the commonly used acupressure points for different health conditions and symptoms.

Differences Between Acupressure and Acupuncture

Although acupuncture and acupressure are both used to stimulate meridians, they do so differently. Acupuncture involves inserting hair-like needles into specific points in the body. The needles are very flexible, and the procedure is usually painless. In some cases, the acupuncturist may stimulate the points by twirling the needles. Although it can vary, the needles may stay in your body for about 30 minutes.

Acupressure uses firm pressure instead of needles to massage and stimulate the meridians. Pressure can be applied using the fingers, palms, hands or a tool.

When it comes to acupuncture and acupressure, one practice is not better than the other. Acupressure has been around longer, but more clinical studies have been conducted involving the effectiveness of acupuncture.  Although acupuncture is usually not painful, some people do not like the idea of needles and may prefer acupressure.

Acupressure and acupuncture are considered safe for most people and usually do not cause any negative side effects. Although side effects are very rare, when they do occur, it is usually the result of a poorly trained acupuncturist or acupressurist.

Since acupressure does not involve inserting needles, there are virtually no side effects. Slight tissue damage is a rare complication, which again is usually due to poor technique by the practitioner. Although most states do not currently license acupressurists, it’s still essential to go to a qualified practitioner.

Look for an acupressurist who completed formal training in acupressure and is certified through a professional organization. The top national certification agencies include the National Commission for Acupuncture and Oriental Medicine and the American Organization of Bodywork Therapies of Asia.

Acupressure is sometimes referred to as ‘pressure acupuncture’ or ‘acupuncture without needles’.

It has been used for thousands of years in China, Japan, and other Asian countries, to promote relaxation and wellness, as well as to treat disease. Acupressure not only treats the body but also has positive effects on mind, emotions, and spirit.

How Does Acupressure Work?

Similar in principle to acupuncture, acupressure is based on the concept of Qi (life energy) flowing through “meridians” in the body. 12 major meridians network through the body, connecting specific organs. Physical pressure applied to any of the numerous acupoints can help clear illness-causing blockages in meridians, allowing for the free movement of Qi.

During an acupressure treatment, a client sits on the chair or lies on the table, then the therapist applies gentle pressure to specific acupoints using fingers, palms, elbows, or a variety of devices. The therapy may involve other methods such as stretching or acupressure kneading massage.

Some studies have shown that improved circulation and release of pain relieving endorphins are two of the factors responsible for acupressure’s many healing effects.

Scientific studies have cited acupressure as effective in the management of nausea and vomiting. It is also helpful in helping to relieve lower back pain, stomach ache and tension headaches.

Acupressure relieves nausea after chemotherapy while improving energy levels. It has been also reported to help lower stress, relieve pain and reduce the severity of other cancer treatment related symptoms.

For arthritis sufferers, acupressure supports anti-inflammatory effects and promotes the release of pain relieving endorphins. Acupressure can be used to lessen fatigue and improve mood leading to a decrease in depression and anxiety.

Here is a list of some other health conditions that appear to improve with acupressure.

Acupressure is generally considered very safe. It is, however, advisable that persons with arthritis, cancer, heart disease, osteoporosis, or other chronic conditions, discuss the treatment with their primary health care providers before proceeding. As the therapy involves deep tissue work with manipulation of joints and muscles, it should be avoided or given a careful consideration before proceeding in any of the following situations:

Acupressure is one of Asian bodywork therapies, a group that also includes shiatsu, Anma, and Tui Na. In Western countries it has steadily gained popularity to combine the technique with regular massage treatment.

Location: On the face, in the nasolabial sulcus, at the same level as the midpoint of lateral border of the ala of the nose.

Location: On the face, directly inferior to the pupil, at the same level as the inferior border of the ala of the nose.

On the face, in the depression between the midpoint of the inferior border of the zygomatic arch and the mandibular notch.

Location: On the face, in the depression between the superomedial parts of the inner canthus of the eye and the medial wall of the orbit.

Location: On the head, in the depression at the medial end of the eyebrow.

Location: On the face, at the midpoint of the philtrum midline.

One Response to Acupressure